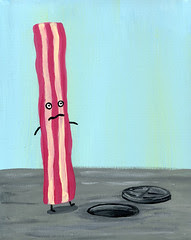 Well yesterday I did my Mr Toast pitch. It was hard to tell if it went well. They asked me some tough questions about who the characters were. The way I create my artwork is such that things are not always real defined in a literal sense. Mr Toast is about adventure, determination, wonder, exploration, fun and many other intangible things. And my show concept has always been very loose, not following formulaic pattern. They also asked why he was a piece of toast to which I had no answer but in retrospect I do have an answer and the reason is because he is based on the classic animated pitch characters of the 1950's. While that is where he came from, I think he has evolved beyond that, until now I think of him as more akin to classic 1950's and 60's cartoon characters. He is meant to be adaptable to any situation so one day he will be running the circus and the next exploring outerspace with no elaborate set up as to why he is doing things. I am more interested in capturing the classic spirit of the circus then showing Mr Toast buying the circus and then having to make ends meet to keep it in business. But at the end of the pitch one of the guys said that Mr Toast was very original and not like anything out there, which I took as a great compliment. Now it remains to be seen whether or not they are looking for something that isn't quite like everything else.

Congratulations on the pitch. I will keep my fingers crossed for you!

Congrats on your pitch. I'm sure you did well. Mr. Toast rules!

Hope all goes well with your pitch. I agree with you that Mr. Toast can do anything and doesn't need an elaborate explanation or foundation as to how he got into the situation. It's what he does in the situation that's important.

"Mr. Toast: Greater than the sum of his crumbs."

I think the beauty of Mr Toast and company is his simplicity...he's kind of an "any man" and without trying, kind of "underdogish"...no super powers just a dude having adventures with his pals. I'm sure you did well with your pitch and know we'll be seing more of him in the future.

1. Mr Toast: is it Butter or Oleo?
2. Lemonhead: Horror at the Lemonade Stand
3. Joe the Egg slips Col. Sanders a Mickey

1. Mr Toast: is it Butter or Oleo?
2. Lemonhead: Horror at the Lemonade Stand
3. Joe the Egg slips Col. Sanders a Mickey

much to consider if this ever happens

Who was the pitch to?

If the world can come to love a sponge in square pants, surely they are ready to believe a Mr. can be made of toast!

mr toast is SO awesome! i love toast!!!! warm and soft on the inside, crispy and buttery on the outside! Who could ask for anything more???!!!???

mr toast is SO awesome! i love toast!!!! warm and soft on the inside, crispy and buttery on the outside! Who could ask for anything more???!!!???