I was at the Glendale Collectors Show this last weekend and stumbled on a very cool box. It was a plain cardboard box that was spray painted with a Wonka Bars graphic on two sides. I knew the dealer who had it and he has a shop in Burbank. It was brought in by a guy that used to work as a grip in Hollywood. He had taken the box home from the set in 1971. He brought it into the dealers store and traded it to him for some other stuff he wanted.

Now here it was in front of me at the show. I was doubtful at first but the more I looked at it, the more it seemed right. I trusted the dealers story and the box was definitly old. So I bargained a bit with him and bought the box.

When I got the box home I was ready to watch Willy Wonka to see if it matched with the boxes shown in the movie. It turns out I only had the film on VHS and our VCR was busted so I ordered the DVD. Three days later its was here and I began scanning the movie. 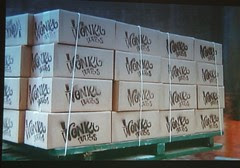 Just a few minutes into the movie and there it was. Same size box, same tape on the side, same sort of sloppy spray job and only sprayed on the 2 sides that would show up in the scene. It was a perfect match. 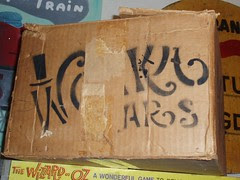 I must say I was pretty surprised. Watching the movie further, I found they also had some larger boxes in the Varuca Salt factory scene and even a super fancy box with a different stencil in the auction scene. 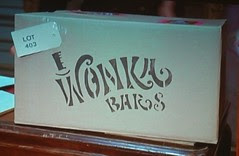 Hard to believe that this box has survived all this time. But what an amazing piece of pop culture goodness.
Posted by Dan Goodsell at 7:28 AM

I assume that the box is empty.

yeah since it was just a prop it never contained bars. The bars in the movie were all just props and the candy later produced did not even look like the ones in the movie.

What a cool find! I don't imagine there are many of these around.

Wow, thats such a cool post and find! I used to love that movie. The chocolate river part was the best.

Man, you find the cooooolest stuff!

Dan, you've got to open a museum!

Hay very cool stuff, reminds me of a few years ago when I use to work for this company. They had me design several Willy Wonka promotional outdoor games. One was a giant nerds box with little plush nerds you catapult with giant half cut gumballs mounted nerds rope seesaw at the targets on the giant inflatable box. Another thing I designed was a machine called that Laffy Taffy pull. It measured your pull strength. Another was this air booth, pretty similar to one of those booths people go in to, air is blown in and money flies around. I even got to actually work on building some of the things like airbrushing est. It looked really cool. I have my original drawings someplace.

This is priceless. And hard to believe it still exists. It's the kind of find that keeps collectors in the game. ---Good for you!

Very cool priceless collectible! I remember these boxes from the movie, one of my all time favorites!

This is incredible and authentic! Potential buyers should be wary of any advertised props on either movie as they have been heavily repro'd.

If you don't mind, I'd be curious to know what you paid for the box. You can email me privately at thft@att.net

My name is Shawn Anthony Smith and while I am avid fan of the Movie(s) I hate to be the bearer of bad tidings but I just finished a run of WILLY WONKA and I helped create stage props, projected video animations etc. for the show I acted in and I also created WOnka Bar Labels. I love finding props etc and have some collectible stuff myself. I hate to burst a bubble but the font on your box is the one I downloaded to create the Wonka Bars/Labels. If you LOOK REALLY LOOK AT THE BOX SHOTS FROM THE MOVIE study the "R" in the Bars word and look at the Hat In the logo on the MOVIE BOZ and then yours. THe donwloaded font does not have the hatching effect in the hat and if you look at the general curvature of the letters it does not quite match. BUT... I will say even as a fake it is still cool to have. I kept several of my prop bars and the Golden Ticket I created!