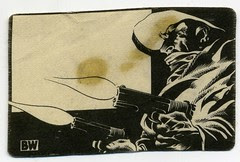 With the San Diego Comic Con less then two weeks away, I started thinking about all times I have attended. I started going in the mid 1970's when I was about 10 years old. My dad would drive me down and I would spend hours digging through boxes of old comics. The badges back then were just stickers like the one shown above featuring the Shadow by Bernie Wrightson.

I got out of comics for a few years but was reintroduced to them when Frank Miller was doing Daredvil in the early 80's and me and my high school friends started going again. I still remember seeing Douglas Adams talk in 1983 right as the Hitch Hikers Guide to the Galaxy was huge sci-fi success. 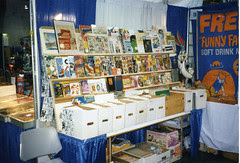 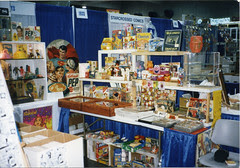 In the mid 1990's, Steve and I set up at the show selling toys and comics. It was fun to do but a lot of work. Through the 90's I continued to go to the show buying toys. 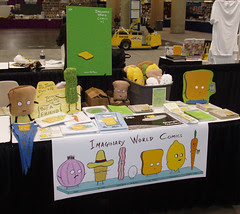 Then in 2005, I did my first set up in small press with Mr Toast. The show was a complete success and I made a ton of new Mr Toast fans. 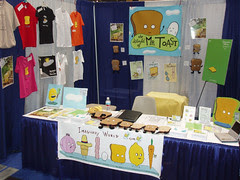 Last year I moved up and got a whole 10x10 booth. Once again the show was amazing. Now I am just getting the last few things together for this years booth and it looks to be my best booth yet. So if you are coimng to the con, stop by and say hi, I will be at booth #2648.

Oh! Didn't read this til commenting on the other post. #2648-check! I've got my pro admission thingy and will be there!
: )

I was just remembering that Douglas Adams panel the other night. And getting Alan Moore to draw Maxwell the Magic Cat. And your old station wagon with the Tigger hanging from the rearview mirror blowing a gasket in Encinitas...

I'll see you down there on Thursday!