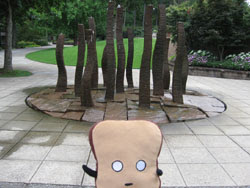 Upon entering the Birmingham Botanical Gardens one is greeted by a fountain which actually encourages visitors to get wet. Mr. Toast declined, feeling quite content to remain dry. 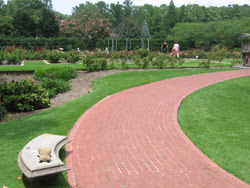 Mr. Toast soaks up a bit of sunshine beside the rose garden. 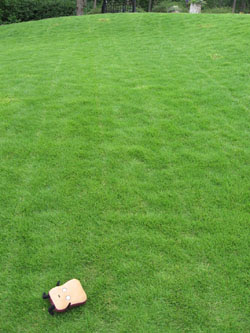 Mr. Toast soaks up a lot of sun on the nearby lush lawn. 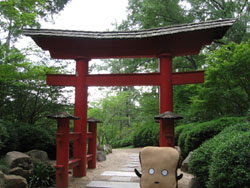 When at the Botanical Gardens, one really must also visit the Japanese Gardens. Mr. Toast agreed. 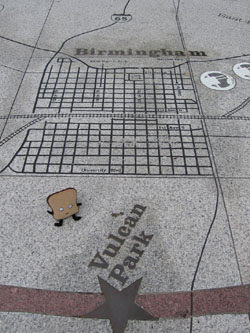 Vulcan Park is the best spot in Birmingham for a view of the entire city (and to play make believe Godzilla by stomping on a pavement map). 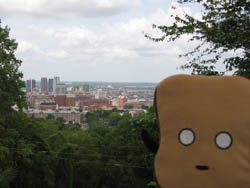 Mr. Toast comments on the attractiveness of the abundance of red brick on Birmingham's southside. 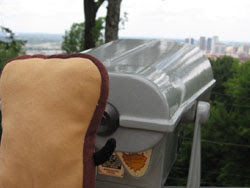 Mr. Toast politely asked whether I might have a spare quarter so that he might take a closer look. 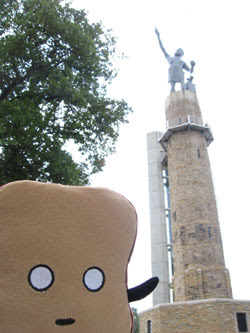 Mr. Toast learns the significance of Vulcan to a city that was born of iron and steel manufacture. 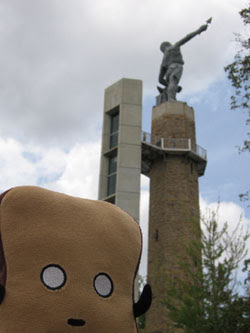 Mr. Toast is a cultured enough fellow that rather than snickering at the god of the forge's bare buttocks he instead ponders the statue's mythological background and classical influence. 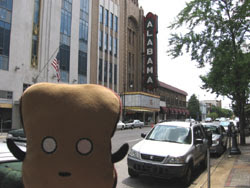 The interior of the Alabama Theatre is a slendiferous display of the glory of the golden age of cinema-going, but, sadly, we arrived right in the middle of a film already in progress. 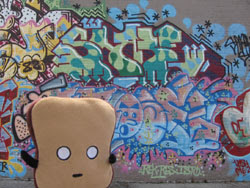 Mr. Toast waxed philosophical regarding the legitimacy of urban art if it's created strictly for commercial purposes (in this case to sell performance auto parts). 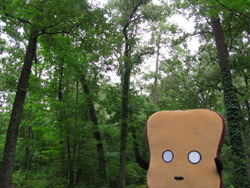 A hot summer in the city necessitates going back to nature for a cool down. 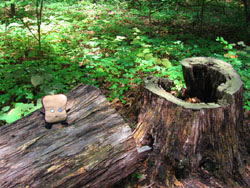 Going back to nature also requires moments of cooling down. 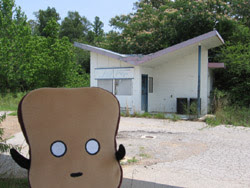 Mr. Toast hoped I was exaggerating when I said that the car was completely out of gas because he feared refueling at this locale might be problematic.

Thank you Brian for playing host to Mr Toast in Alabama.....