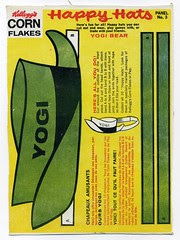 I just love this box back. I would love ot find a picture of a kid wearing his Yogi Bear hat. It really makes me think about what a wonderful marriage it was between cartoons and cereal boxes in the 1960's. The perfect and graphic flat surface of a cereal box was a real equivalent to the flat cartoon image from the TV screen. The scales were similiar but the cereal box was a great static reminder of what had been seen on the TV. And in the case of this hat and other cut outs, the kid would be drawn into the cartoon world. Quite a bit different from the immersive media world we exsist in today. That is not to say it was better back then, just very different.

Hi Dan. Your blog is still one of the best. I enjoy your art more each time I see it. I may be inspired to pick up the brush once again.
Maybe the 60's didn't have the graphical abilities we have today, what with all the CGI templates, but I feel it has a "soul" of sorts. Some of today's animation art seems to lose something in the translation, doesn't speak to me.