A Good Day at the Flea Market 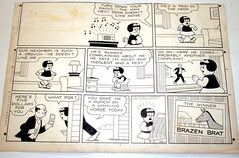 You never know what is going to show up at a flea market. Today was one of the good ones. We found a 1974 original piece of art from the Nancy comic strip by Ernie Bushmiller. His art is so pure and the gag is so great it really blows me away. 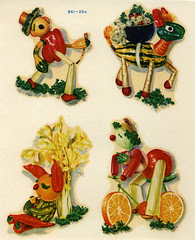 This sheet of produce creatures decals is such a classic piece of americana. Fruit and vegetables sculpted and then made for placement on the bathroom mirror. Crazy. 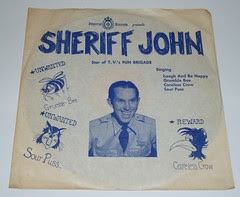 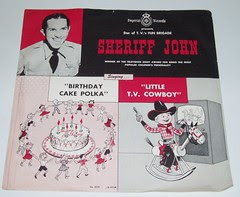 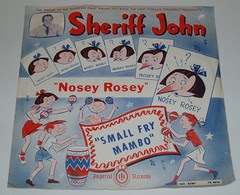 Sheriff John was one of the most popular Los Angeles local kids TV show hosts. They did not produce much stuff but finding 3 different 78 records at once was a real treat. 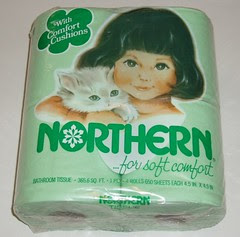 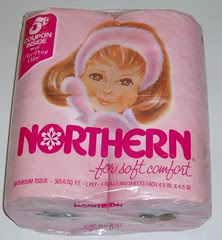 I don't often buy old toilet paper but these Northern Tissue packages from 1974 were to great to pass up even if they were a bit embarrasing to carry back to the car......
Posted by Dan Goodsell at 10:26 AM

I used to eat lunch with Sheriff John every day. My mom would make me the same sandwich that he was eating.

Dan- amazing luck at the swap meet. I would have loved to see you carrying the Northern tissue!

That toilet paper has no chamomile or jojoba or even aloe for crying out loud! Was everyone a heathen back in 1974?

How do eight rolls of toilet paper manage to to escape their manufactured destiny for thirty two years is beyond me. I wonder what it would be like to use toilet paper that is older than I am...

Wow, Sheriff John! I grew up in LA and spent many an hour with him.

Was this the Rose Bowl flea? Great scores!

makes me hungry for maggio carrots.

We'll have some pie and sandwiches and choclate ice cream too
We'll sing and play the day away and one more thing I'm gonna do
I'll blow out the candles on My birthday cake and when I do
a wish I'll make
put another candle on
My birthday cake
I'm another year old today...