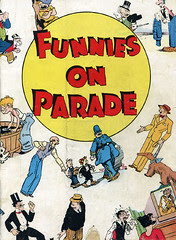 Today as we were walking around at the flea market, I looked over on a table and saw a box of comics. Right there in the front was a copy of Funnies on Parade. At first I could not believe it but I pulled it out and it looked right. There was also a nice copy of Popular Comics #19 from 1937 right behind it. All the other comics were from the 70's and 80's so I paid for the books and moved on.

When I got home I did some research on this book and found out that it is considered to be the first comic published. It was produced in 1933 and contained reprints of popular Sunday newspaper comics reproduced at half size. It was given away as a premium for Procter and Gamble and only 10,000 copies were printed. It was a huge success and many other reprint comics followed as did a flood of superhero, romance, horror and genre comics that continue up to today.

I don't know that I will keep it but as a life long comic collector, it is quite a neat thing to find on a Sunday morning.

Great find Dan. Who is on the cover of Popular comics #19?

Smitty is on the cover, not too impressive.

But secretly I hate you for it...

It's the twisted split-psyche of the diehard collector.