The Long History of Mr Toast

Well in the interest of clarity I have dug through my archives to try to piece together the history of Mr Toast. I don't have a great memory but luckily I have saved a few notebooks, slides and drawings which have awakend a few brain cells to help me put this together. It all started with a photo clipped from the newspaper of a guy dressed in a bread suit. This inspired me for some reason and in a notebook I drew myself in bread costume doing a "Bread Song". This never came to pass but not long after a freind, Greg Kay, wanted to do a 16mm movie and I came up with the idea of Mr Toast, a lonely character who spends all his time writing letters which all get returned because he did not properly use the Zip code when addressing them. I constructed a foam suit and we shot the film in 1988 just for fun. I don't think we ever showed it anywhere and it is now lost to the ages.

Mr Toast's next appearance came in 1989 when I was in a show at the Irvine Fine arts Center. I created a series of dioramas which told the story of a mailbox trying to find its way home. During this journey it runs into Mr Toast who lives in a haunted house. I am not quite sure why he lived in a haunted house but there you go. Mr Toast was made out of a piece of wood with sculpy arms and legs. He was very primitive in appearance.

For the next 10 years, I spent most of my time working and following my interests in collecting. Then in 1999, I chose to start working on my art again. My idea was to create my own amusement park called The Imaginary World. As it went along I realized that I had to have characters to inhabit the park and Mr Toast made his comeback in this drawing from my sketchbook in 2000.

Well things really got rolling with Imaginary World and I wanted to start making silk screened t-shirts and Mr Toast was to be the first. The initial design was trimmed down in the final design. Most of these shirts were given away to friends and family. Since this first shirt I have done about 20 more designs. 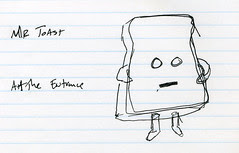 This drawing was for a costume that would have be worn around at the actual Imaginary World park. Over the years I have made 3 Mr Toast costumes, the first for the film in 1988, one in 2004 for my appearance on Big which turned out to be too heavy for continued use and a brand new one in 2006 made of foam and cardboard for the Ben Maltz show. 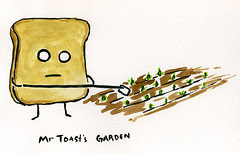 This drawing was the first to really establish Mr Toast as the central character in my artwork. It is ink and watercolor and was done in June 2002. My line work is pretty shaky but it really shows who Mr Toast is going to be. 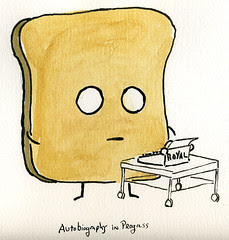 As the drawings went along, I found that a caption really added to the story that was being told. A perfect caption was usually about 3-4 words and added a bit of information that might not be apparent in the drawing. 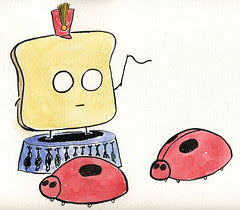 By 2003, i was working on series of drawings and paintings that were linked thematically. The Mr Toast circus drawings all cast Mr Toast in different jobs at the circus. I featured the drawing on the site in a page thorugh format. This led me to the idea of doing the Mr Toast at the Circus book.

I started the "Slice of Mr Toast" comoc in February of 2004 and it would really helped me to develop the character of Mr Toast. As the comic went along I learned how the characters interacted and what the stories were that I wanted to tell. So after about 18 years I am finally getting to know who Mr Toast really is.
Posted by Dan Goodsell at 2:31 PM

I loved seeing this. Fascinating stuff!

I remember playing Mr. Zip in that film, wearing the paper mache head and explaining to Mr. Toast how to use the Zip Codes...

thanks Mike I would never have remembered that

mr. zip could have helped him out back in the old days...

My son and I love toast... Mr Toast! We're hungry for more!