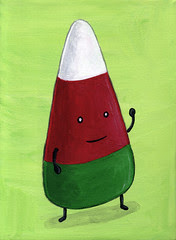 Well 2007 turned out to be a great year for me and Mr Toast. Early on I saw the publication of Parade, a book that nicely surveyed my artwork. I also produced the Mr Toast vinyl figure and plush toys of Joe the Egg, Clem Lemon and Shaky Bacon. I got to take part in numerous art shows at great galleries like Gallery 1988, Monkeyhouse Toys, Munky King, Schmancy and others. In doing so I have painted more paintings in one year then I care to think about. I also set up with Mr Toast stuff at great shows like LA Times Festival of Books, Comic Con, Felt Club and VTN.

This year looks to be just as exciting. I just sent Imaginary World Comics #2 off to my printer. I am waiting on the bulk of my Mr Toast vinyl figures which should be in stores in spring. I have a solo art show coming up in March at Monkeyhouse Toys. I will be setting up with tons of fun things at LA TImes Festival of Books in May and at Comic Con in July.

You deserve all the good that comes your way, Dan. You've worked hard for it. Congratulations. It's heartening to see one of the good guys win.

We really enjoy all of your Mr. Toast stuff and look forward to more!
Think t-shirts...?
Have a great 2008!