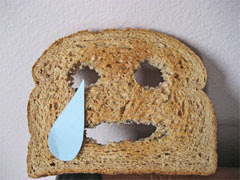 A number of fans of Mr Toast have emailed me about a series of commercials by Nissan that include a toast character that has a bit of resemblance to my own character. The commercials are done by the artist Marc Horowitz, who spends 7 days living in his Nissan. One of his companions is Toast A. Licious, an actual piece of toast with a face poked in it. The commercials are quite funny and he has an online blog about the whole affair.

A few people have wondered if this character was inspired by Mr Toast. I don't think so. The urge to put faces on food has been a long one and very influential in the worldof advertising (think Funny Face drink mixes). I know of a number of artists who have toast characters in 2D and 3D form. I realize that one of the strengths of Mr Toast is his look but beyond that I think are the stories and all the interactions amongst the characters. I am planning on working on Mr Toast for a long time and other toast characters may come and go but he is here to stay. 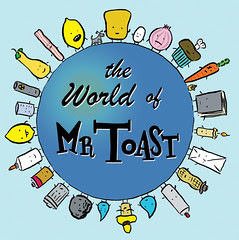 I posted message to my blog (PopuLAARI) about your Store Displays -photos. Hopefully it's ok. Naturally I mentioned the source and made three links to your www-pages.

hello! followed a link from swapatorium. i have a 'toast' realted photo. i will let you know when i post it! bye bye mr toast

I was thinking of you and your Mr Toast when I seen those Nissan Commercials (they are pretty funny!). I love the toast sitting in the lawn chair! LOL!