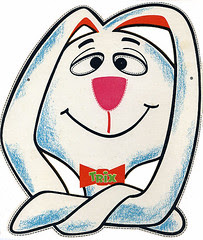 I had to dig into the cereal box archive today to pull out a Cocoa Puffs box that a friend needed for reference. Sitting there with it were all the Trix boxes so I thought I might do a little post on them. The first rabbit to appear on a Trix box seems to be Brer Rabbit from Song of the South in 1956. Then in about 1958 came the Magic Rabbit whose companions included Mr Space Bird (Jets) and Eager Beaver (Cocoa Puffs). Then in 1960, the Trix Rabbit made his appearance. He started off as a stuffed toy but quickly morphed into an animated rabbit. He went through a number of incarnations as the years went by including the roller skater and sherlock holmes version. In 1970. they even threw out the trademark red for purple but that did not last. By 1972 the Trix Rabbit had stabilized into the design which would last into the 1990's. 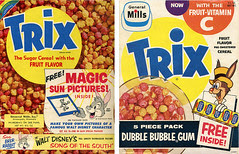 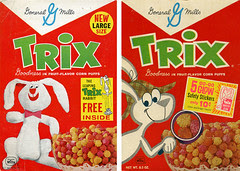 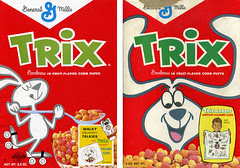 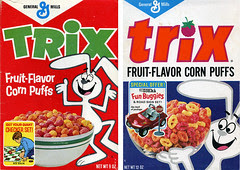 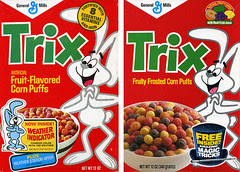 Ohhhhhh.... those are so cool! Man, you have an amazing box collection.... What ever happened to the "Flake" guy? Didn't he sell all his boxes off?

yeah Scott Bruce left collecting - I bought the tail end of his collection (including a couple of the boxes pictured in this post) - he had so much stuff it took him 5 years to sell it all....

LoL! What's with the third one down on the left? It's almost as if their illustrator was out on vacation and they needed to come up with a quick fix for the press run. "Quick! Go get Bobby's bunny rabbit from his room...we'll shoot it, and I'll just draw a face." Excellent, excellent images. Thanks for the entertainment.

These are very cool. But clicking on the top pair does not lead to bigger pics. Help?

Silly Rabbit, you looked a lot different back in the day. LOL