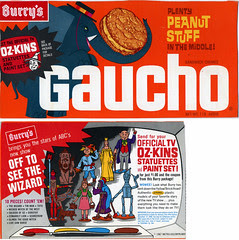 Hey Dan I have that premium set nice to know where it came from.

Those suckers tasted great, too!

Burry's Gauchos. The best peanut cookie on the market in the 70's.

What happy memories... I could eat as many as I wanted and never get fat. Today, I can just look at the box and feel my belt get tight.

Very nice!! I would KILL for some "Peanut Stuff" right now. LOL!

"Off To See The Wizard" was an ABC tv series that ran 1967-1968. Short animated bits with the characters from The Wizard of Oz were used to introduce the movies shown. Nature documentaries and films from the MGM film library made up the bulk of the programming although some show were original productions. Bits of these are included on some of the Wizard of Oz DVDs as an extra. "Journey Back to Oz" was something separate from this.